In the 20th-century, southern black musicians found the devil in the harmonica. The cheap and portable instrument was made at Hohner’s workshop in Germany for use in traditional European waltzes and marches, but when it made its way to America’s Southern neighborhoods, black musicians began to develop a totally new way of playing, which bent the harmonica’s sound (quite literally) to fit the style of the country’s increasingly popular “devil’s music,” or rather, the blues

Blues harp or Cross harp denotes a playing technique that originated in the blues music culture, and refers to the diatonic harmonica itself, since this is the kind that is most commonly used to play blues. The traditional harmonica for blues playing was the Hohner Marine Band, which was affordable and easily obtainable in various keys even in the rural American South, and since its reeds could be "bent" without deteriorating at a to rapid rate.

This changed history of the harmonica forever.

On January 30th in 1896 the Marine Band was registered and the trademark was protected in Germany!

In this painting I have a Marine band taken apart to show you the cover plates reeds and  wooden comb this is an old original harmonica that used nails to hold it together now screws are used . 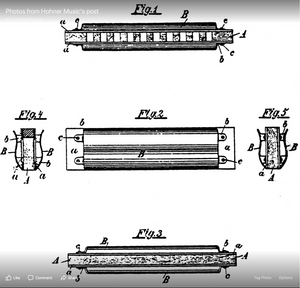 Richter tuning is a system of choosing the reeds for a diatonic wind instrument (such as a harmonica or accordion). It is named after Joseph Richter, a Bohemian instrument maker who adopted the tuning for his harmonicas in the early 19th century and is credited with inventing the blow/draw mechanism that allows the harmonica to play different notes when the air is drawn instead of blown.

Richter tuning is designed as a compromise between diatonic melody and harmony. The lower portion of the harmonica is designed to play the tonic and dominant chords on the blow and draw respectively (in the key of C, this would be the C major and G major chords). The remainder of the instrument is tuned to, in this example, blow entirely in the key of C major, with each successive note following the sequence C E G

and the four notes not in the C major chord arranged on the draw in the sequence D F A B.

Once in the hands of the Black southern musicians bends were found that is to say you can on the bottom half bend them down as far as 1 and a half steps.

Bending notes is, without a doubt, one of the the important technique in harmonica playing. It adds that special bluesy something to your play, and allows you to play semi-chromatically on a normally diatonic instrument - especially in second position. is the most commonly used position for playing blues, rock and country. This position consists of mostly draw notes on the low end of the harmonica (holes 1 through 5) and it is important to master bending to play in this position.

In the 1970s, Howard Levy developed the "overbending" technique (also known as "overblowing" and "overdrawing".) Overbending, combined with bending, allowing players to play the entire chromatic scale. When bending, the player forces the lower of the two reeds in a chamber to vibrate faster, while the higher pitched reed vibrates slower. When overbending, the player isolates the higher of the two reeds and by so doing can play higher pitched notes. By using both bending and overbending techniques a player can play the entire chromatic scale using a diatonic harmonica. This has allowed diatonic harmonica players to expand into areas traditionally viewed as inhospitable to the instrument such as jazz.

1.DeFord Bailey was an American country music and blues star from the 1920s until 1941. He was the first performer to be introduced on the Grand Ole Opry and the first African-American performer on the show best known for his harmonica tunes.

2. Willie Mae “Big Mama” Thornton is considered one of the greatest female blues player on harmonica.

3. Sonny Boy Williamson, was an American blues harmonica player, singer and songwriter. He was an early and influential blues harp stylist who recorded successfully in the 1950s and 1960s

4. Stevie Wonder, is an American singer, songwriter, musician and record producer. A prominent figure in popular music, he is one of the most successful musicians of the 20th century

Now on to the three 8 by 7 inch graphic art pieces. With my inspiration, teachers and great artist with the players that were there ins[ration and influenced there playing harmonica as a career ! 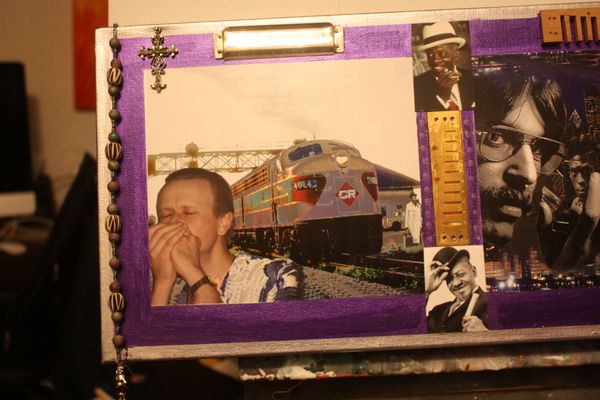 Joe Filisko is an American blues harmonica player and maker of customized harmonicas based in Chicago, Illinois. In 2001 he was named "Harmonica Player of the Year" by the Society for the Preservation and Advancement of the Harmonica. Joe helped design the thunderbird low tuned Hohner harmonica. 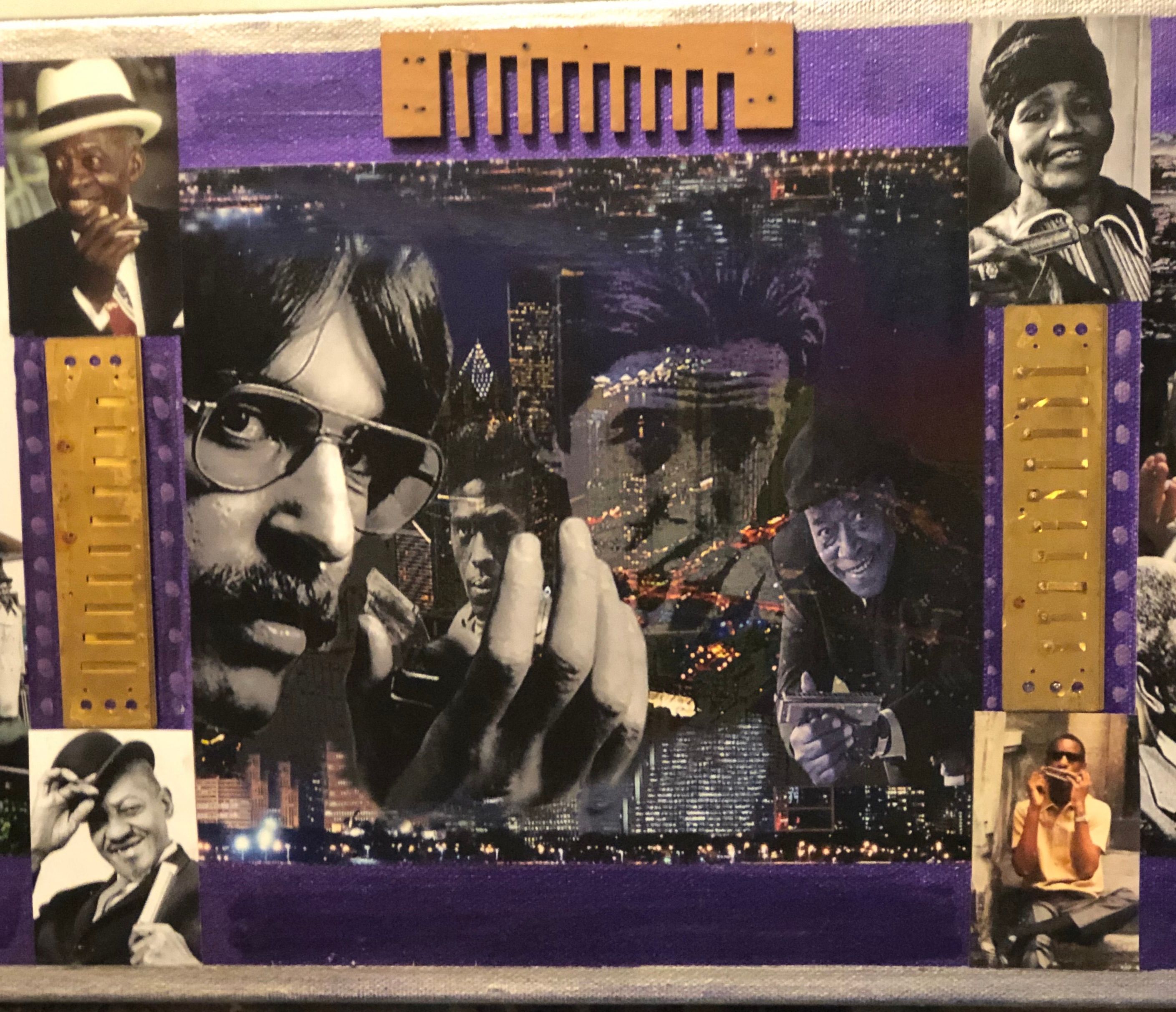 .Junior Wells was an American Chicago blue harmonica player, He was one of the pioneers of the amplified blues harp-style associated with Chicago.

James Henry Cotton was an American blues harmonica player, singer and songwriter, who performed and recorded with many of the great blues artists of his time and with his own band is famous for his harmonica playing.

Third on the end far right. 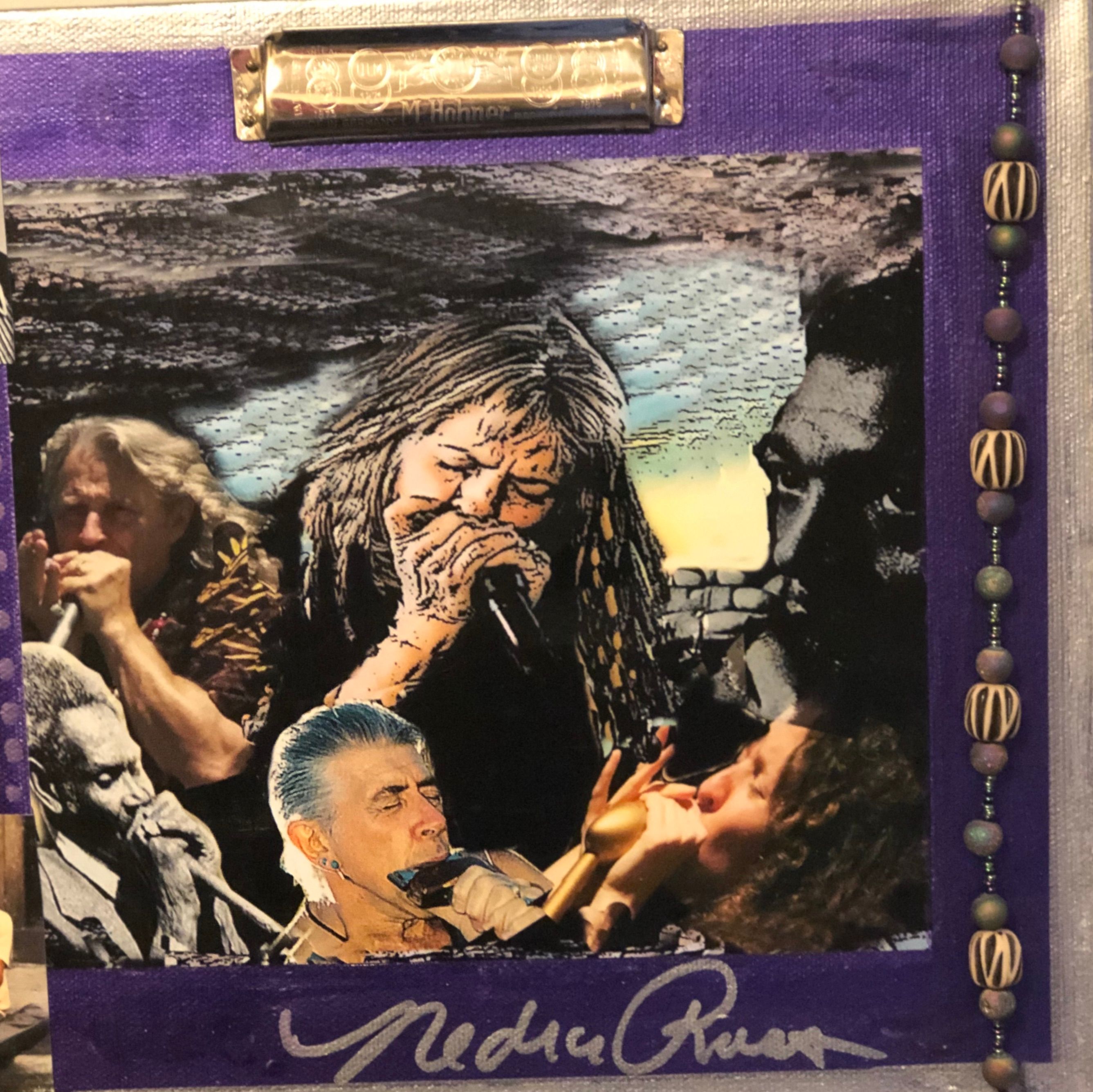 Little Walter, was an American blues musician, singer, and songwriter, whose revolutionary approach to the harmonica and impact on succeeding generations has earned him comparisons to such seminal artists as Django Reinhardt, Charlie Parker and Jimi Hendrix.

Norton Buffalo, was an American singer-songwriter, country and blues harmonica player, record producer, bandleader and recording artist who was a versatile exponent of the harmonica, including chromatic and diatonic.

Annie Raines is an American musician, best known as a harmonicist. She grew up in Newton, Massachusetts. Raines took up the harmonica at the age of 17. As a freshman, she left Antioch College to pursue a musical career

1999 Nedra attended her first Master Class on harmonica put on in San Jose by David Barrett of the renowned School of Blues, https://www.bluesharmonica.com/home Also, she started studying under Howard Levy, a world-renowned master of all harmonica genres, at this time.

2008 Was installed on Board of Directors for ART IN THE GARDEN, an annual West Point art with music event. Nedra continued as volunteer Art Director with them through 2017

2009 Attended her second Blues Master Class sponsored by the School of Blues and attended the 46th Annual Conference of the Society for the Advancement and Preservation of Harmonica (SPAH). http://www.spah.org

2010 Was awarded the 2010 Teamagic Award in recognition of her service to youth and community by BMCYF.

2010 Nedra enrolled at Artist Works, an online teaching center, and began studying advanced harmonica techniques under Howard Levy, as noted above, a world-class master of all harmonica styles. https://artistworks.com/harmonica-lessons-howard-levy

2011 Nedra wrote the music, designed the art work, and produced the first album of her discography, Movin’ On. This marked the beginning of NJR Productions and she was soon accepting musician customers to record their work, which led to providing instruction and musical counseling services as well to her customers. 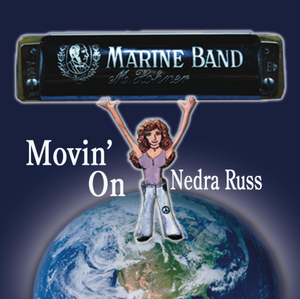 2011 Attended the 48th Annual Conference of the Society for the Advancement and Preservation of Harmonica (SPAH) in Virginia Beach, VA.

2013 Nedra won First Place in the Harmonica Category for a rousing railroad train instrumental at the  “Singing Rails” contest at Railtown 1897 in Jamestown.

2014 Was accepted, based on her creative use of harmonicas in jewelry design, as an endorsed Hohner™ “Juke Joint Representative.” Hohner is the world’s largest harmonica manufacturer. https://www.hohner.de/en 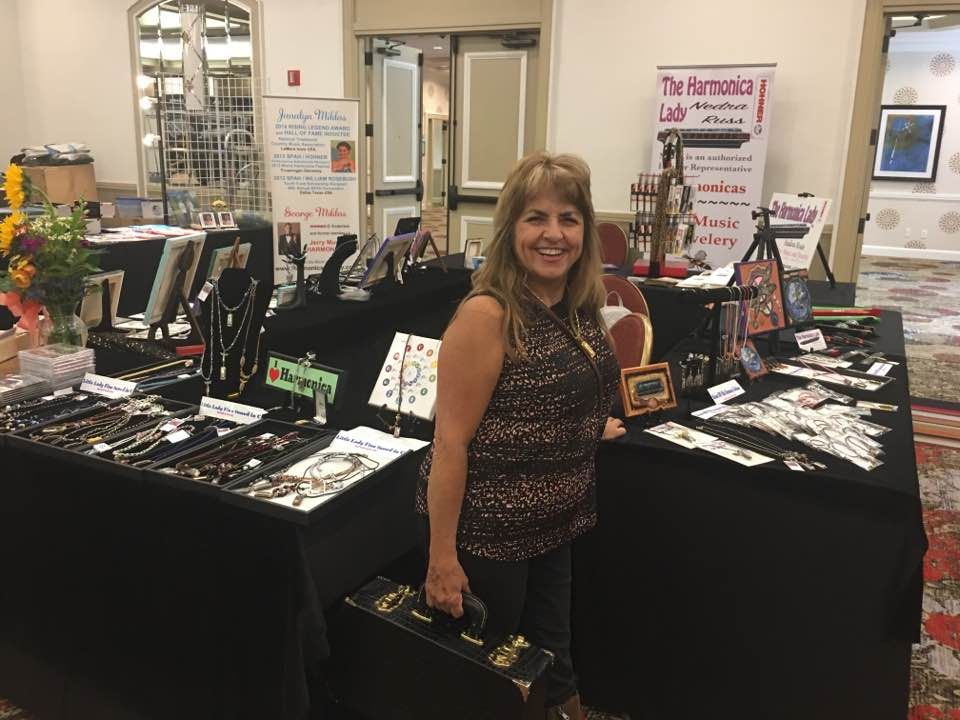 2015 Completed the 4 modules, Songwriting, Introduction to Music Production, Developing Your Musicianship, and Modern Musician Capstone of the Modern Musician Specialization course and was awarded Certificate of Completion. https://www.coursera.org/account/accomplishments/specialization/certificate/F6AAA6EN7FVM

2015 Nedra completed course: The American South: Its Stories, Music, and Art, and was awarded a certificate from the University of North Carolina, Chapel Hill.

2016 Nedra was interviewed and added to the roster of “Famous Harmonica Players” by the Netherlands-based Bluesharp Info. https://www.bluesharpinfo.com/interviews/nedra_russ.php

2016 Attended the 53rd Annual Conference of the Society for the Advancement and Preservation of Harmonica (SPAH) in San Antonio, TX. Nedra prepared and presented a seminar, “Making the Music.”

2017 Nedra was asked, in addition to teaching the “Making the Music” seminar, to perform in the Variety Show on the Main Stage of the 54th Annual Conference of the Society for the Advancement and Preservation of Harmonica (SPAH) in Tulsa, OK. The original tune performed, Happy Little Frog,

2018   Nedra was asked to be a broadcaster at KQBM community radio with a reach that spans Northern California and from the internet the world. KQBM archives further promoting and keeping harmonica moving with the times.

2018 Nedra was invited to submit songs to be published in The Amador-Calaveras Songbook, Lyrics and Links, a project sponsored by the Amador Ledger-Dispatch and the Jackson Rancheria. In addition to recording and contributing two of her own songs, Pine Grove and Happy Little Frog, Nedra was the Recording Engineer, harmonica player and music Producer on three other songs, Calaveras and Brick by Brick by Susan Preece, and The Argonaut Mine by Den McCue. This publication showcases local talent by presenting lyrics and music will be distributed along with the newspaper on February 15th, 2019 by the Ledger-Dispatch.

2018   Nedra taken on board as a Harmonica Teacher by Hohner Harmonica and also now sponsored by Lone Wolf Harmonica company .

2019   Nedra is the Art and Music Director for Blue Mountain Coalition for youth and family with a grant from the California Art Counsel State fo California. 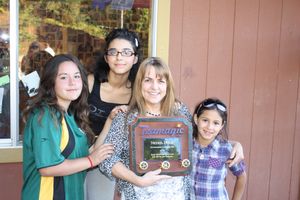 Nedra Will be at SPAH on Tulsa SPAH